Word got out yesterday that actress Yvonne Craig passed away.  If the name isn’t familiar to you, these two images, perhaps her two most iconic roles, most certainly are.

First up, as Batgirl in the famous, and purposely campy, Batman TV series of the late 1960’s: 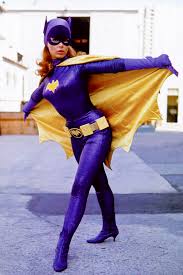 Secondly, as Marta, perhaps the most famous of the green-skinned Orion slave girls and featured on the original Star Trek series episode Whom Gods Destroy:

As one grows older, it sometimes comes as a shock to realize actors you associate in your mind (and thanks to the permanence of their taped roles) as so very young wind up being just like you and also susceptible to the ravages of aging.

In my mind, Harrison Ford is forever associated with his youthful roles in Blade Runner and Raiders of the Lost Ark.  Now 73 years old, it came as something of a shock to see him in the latest Star Wars movie commercial, though I had seen his gradual aging in other recent roles (including his fourth appearance as Indiana Jones).  Still, upon seeing that commercial and realizing it was the first time I’d seen “Han Solo” since (gulp) 1983, for the first time I saw him as what he was: An older gentleman yet one who in my mind remained forever frozen as he was back then.

So too it was a shock to realize that Mrs. Craig passed away at the age of 78.  Unlike Mr. Ford, she hadn’t appeared in any significant role on screen since the early 1980’s (she has a single role listed for 1990 and voice work for 2009-11) so her visage is stubbornly linked to the roles I see above, forever young and stunningly beautiful.

It was a shock to read of her passing and a further shock to realize she had lived a very long and (I certainly hope) full and fulfilling life.  R.I.P., Mrs. Craig.  Like many others of my generation, I will always remember you.

One of Mrs. Craig’s very early roles was captured in a May 31st, 1958 aired episode of the first season of the very popular Perry Mason show.  The episode, titled “The Case of the Lazy Lover“, featured both Mrs. Craig and, delightfully, actor Neil Hamilton.  This man’s name isn’t familiar to you?  Perhaps this image will refresh your memory: Interesting they would reunite some 10 years later on the screen!