Saw this film a very long time ago, when I was a child.  Didn’t remember all that much about it, other than perhaps the famous climactic sword fight between Tyrone Power’s Don Diego Vega (aka The Zorro) and Basil Rathbone’s Captain Pasquale, still considered by many the best sword fight ever put to film.

But considering the 1940 version of The Mark of Zorro (itself a “modernization” or remake/reworking of the 1920 Douglas Fairbanks film of the same name, which was a big inspiration for the creation of Batman) is among the earlier examples of “super hero” movies, I was interested in giving it another try…

So, how did this 70 plus year old film fare?

Most people, I suspect, are at least somewhat familiar with the story of Zorro, even if it may be through parallels with the character of Batman, which we’ll get to momentarily.  The setting is early, Spanish controlled California.  Young Don Diego Vega is in a Spanish school and returns to California to find that his father has been dumped from his Mayoral job and replaced with a man of considerably less virtue.  The Mayor and his right hand man, Captain Pasquale, are heavily taxing the poor citizens and generally running roughshod over the entire county.

Don Diego Vega quickly realizes he needs to do something to rid the territory of these evil characters.  To that end, he sets a plan in motion.  Because few remember him from before he left to Spain, he acts to all those around like a -let’s be blunt here- fey/homosexual pretty boy (though no one comes right out and says he’s “gay”, it is heavily implied!).  But by night, of course, Diego dons his Zorro disguise and mounts his trusty black Stallion and is off fighting the corrupt forces behind power, his ultimate goal to restore the town to its previous ways.

The above paragraph gives you the parallels between Zorro and Batman.  Bruce Wayne is presented not unlike Don Diego Vega, though the heavily implied homosexuality present in the movie isn’t quite as present in the comic book (though you can find it hinted at in some of the very early stories).  Nonetheless, both display the “spoiled party boy” elements.  Moving on, the mask and flowing capes are very similar and the black steed could easily be a proto-Batmobile.  Both characters share a desire to fight corruption as well, although the Zorro’s focus is government corruption versus Batman’s more “street” level crime fighting.

Getting back to the movie, it moves along at a breakneck pace, setting up each situation quickly while presenting the audience with new information.  Don Diego Vega’s decision to a) act fey and b) become the Zorro is never really dealt with in anything approaching a deeper psychological way…he does what he does because that’s what he does.  This is not a “heavy” film in any way, it is quick moving popcorn entertainment.  This extends, it would appear, to the Zorro’s costume as well.  There are a few sequences where Zorro wears his standard mask, one that covers the upper half of his head…while there are also a couple of sequences where he wears a mask that covers the lower half of his head! 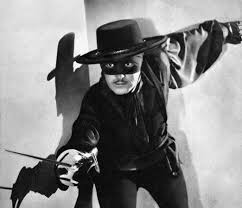 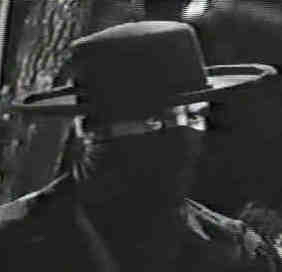 Why?  Who knows.  The mask inconsistency, like the decision to act fey, is never really addressed in the movie itself.

Regardless, the different masks do not in any way mean the film is a sloppy work.  You get plenty of well created action, adventure, and, the cherry on top of the pie, romance.  Don Diego’s attraction to the lovely Lolita Quintero (Linda Darnell) provides that extra spice to an already great film, as does his relationship with the character’s more wicked aunt (and wife of the corrupt Mayor), Inez Quintero (Gale Sondergaard).

If the film has one fault, it is that the excellent duel between Don Diego Vega and Pasquale, a duel audiences were waiting for from the moment the two characters first laid eyes on each other, happens a little too early into the film.  In fact, it occurs just before the movie’s actual climax, which is a curious and somewhat disappointing choice.  Perhaps Pasquale and Vega should have had two duels, the first before the climax (with Vega in disguise as Zorro) and the second when his identity is exposed.

Ah well, its a small complaint.  Despite its age, The Mark of Zorro is a fun action/adventure film that is well worthy of your time.  Recommended.