Earlier this morning -at 10:17 A.M. to be precise- I posted the following blog entry regarding zeppelins (you can read the post here).  The upshot of my entry was that I was turned on, via reddit, to a great photograph from 1931 of a zeppelin flying over a pyramid at Giza and that, in turn, made me wax nostalgic for my love of zeppelins in general, which had me noting how I used them extensively in my first published work, the retro-futuristic noir mystery graphic novel The Dark Fringe. 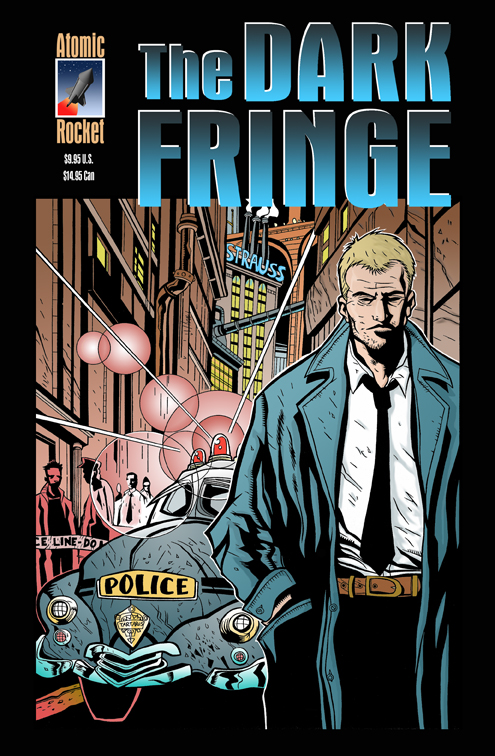 Not 45 minutes later and posted on i09 I find the following article by Katharine Trendacosta:

Although it wasn’t presented among Ms. Trendacosta’s top 10, I wasn’t terribly surprised to find the Fringe second season episode Brown Betty listed among the comments as another example of a show using a different genre within its run.  For those unfamiliar with the episode, here’s the trailer to Brown Betty:

So what the heck does that have to do with my similarly titled The Dark Fringe?

I strongly suspect my book, originally released in 1996 (Fringe first aired in 2008 and some ten plus years after my book’s original release and Brown Betty in particular first aired on April 29, 2010), was at least a partial inspiration for that particular episode.

Now, before you think I’m one of those creative types who screams “they ripped me off!” every time some work comes with some vague similarity to my own, take that thought from your head.  I don’t and I’m not making this claim regarding Brown Betty.

As I said, I strongly suspect my book INSPIRED that particular episode.  Not in its story, however, but in the setting/visuals they used.

But I’m getting ahead of myself.

As I said before, I published the four issues of The Dark Fringe in the mid-1990’s and collected and published a Trade paperback (TPB) of the run in 2003.  The TPB caught the eye of one Scott Rosenburg at Platinum Studios.  He had brought the Men In Black comic book to the big screen (I believe he originally had a hand in its creation as a comic book) and founded Platinum Studios to promote other comic book stories/concepts for the movies.

Anyway, he found and read The Dark Fringe at the time the TPB was released and offered to present the book to the movie studios.  I agreed and he did.  During that time, he also managed to get another of his properties, Cowboys and Aliens, off the ground and made into a feature film and I know he presented my book to the people behind that movie.  And among that movie’s creative staff were some of the same people behind a little TV series which would soon appeared entitled, you guessed it, Fringe.

Was the Fringe inspired, at least by its title, by my The Dark Fringe?  I don’t know and it is irrelevant.  As it originally appeared, the Fringe TV show was clearly inspired by The X-Files rather than anything remotely similar to what was in my series.

However, when Brown Betty appeared in season 2 and my wife and I watched it, I distinctly recall turning to her not ten minutes into the episode and after seeing its film noir setting along with zeppelins and old-fashioned radio/computer hybrids, and saying: “Looks like someone on the show’s read The Dark Fringe!”

My wife was incensed.  “How could they rip you off like this?!” she said.

I wasn’t as bothered.  As I’ve already noted, the story presented in Brown Betty was nothing remotely like what I wrote for The Dark Fringe.  However, back in 2010 and to the best of my memory there wasn’t anything quite like the Zeppelin heavy retrofuturistic film noir setting that I presented in my book and which I now saw in that episode.

So while Brown Betty had nothing like my story within it, I to this day believe someone on the show’s staff (perhaps several someones) were at the very least inspired by my book’s “look” and emulated it for this episode.

This was not an unusual thing, either.  Several episodes in that second season of Fringe were clearly inspired by other comic books, including the season’s two part conclusion which liberally used DC’s multiverse concept.

So there you have it, for what its worth.  Whether inspired by my work or not, I enjoyed Fringe and I enjoyed Brown Betty.  Maybe moreso because they maybe, possibly, could have, might’ve drawn some inspiration by one of my own humble works.

One thought on “Inspiration and wild timing”