A couple of days ago it was announced that Warner Brothers were finally going to release the full, 3 hour version of the Richard Donner directed, Christopher Reeve starring Superman (1978) to home video.  They announced this on Facebook… 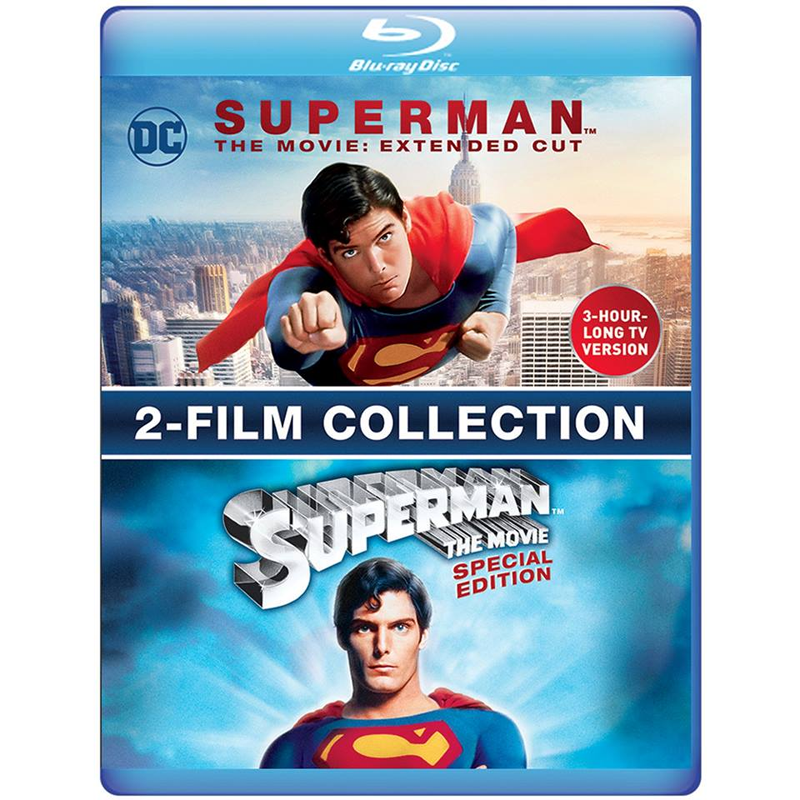 As you can see in the image I posted above, this is the “3 Hour Long TV Version” that is being promoted/sold here.  Back in 1982, when the film aired on television, is was a very big event and they showed the film over two nights and this version, unlike the later released “Extended Version” (or, as its listed above, the “Special Edition.”  I’ll refer to this version as SE from now on), featured even more footage not seen before.

Because at some point in the late 1990’s -and this was when laserdiscs were first coming into their own and waaaaaay before the advent of DVDs- I was at a convention and among the various dealers I found one who sold a bunch of VHS tapes of oddball/unavailable films and TV shows.  Among them was the then red-hot Pamela Anderson sex tape (this was before the internet came into its own, as well!), the Roger Corman directed (and never released) Fantastic Four, a bunch of TV shows that to that point weren’t at that time available (Space: 1999, Thunderbirds, etc.), and that TV aired version of Superman.

Though it shames me to admit it, I purchased the Pamela Ander– uh– Superman VHS tape and when I got home I eagerly put it on.

I have to give credit to the bootleggers: They took considerable time and effort into making this admitted bootleg copy the best thing they could.  They took the laserdisc/widescreen version of Superman as the base and intersliced all the extended scenes from that TV airing into their proper places.  As a viewer you could easily see what was the theatrical release -it was all the widescreen stuff- and what was aired during that two night TV event -fullscreen and of sometimes dodgy quality.

I wound up enjoying the TV version immensely.  Other than an extended bit with a Kryptonian Military Policeman which went nowhere (see next paragraph), this version seemed to be very close to a working “final cut” of the film for director Richard Donner.

(As for that Kryptonian Flying Motorcycle cop bit: After General Zod and his cohorts are banished to the Phantom Zone, Jor-El (Marlon Brando), talks to the Council of Elders about Krypton’s imminent destruction.  The Council will have none of it and forbid him from causing any hysteria.  He returns home to place his son on the rocket ship and the Council, fearing Jor-El continues defying them, calls a Kryptonian Military Policeman -see image below- to go arrest him. 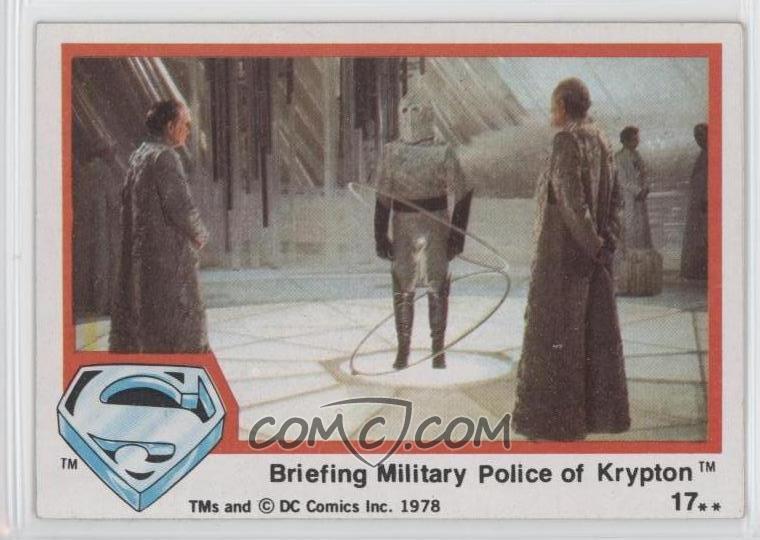 The Military Policeman gets on his flying motorcycle and is off to get Jor-El when the end of that world occurs.  We get some shots of his POV as he flies through the devastation before eventually dying via falling buildings.  It was a silly bit of scenery that didn’t really add much suspense to the proceedings and was a welcome cut, IMHO)

When in 2000 they released the SE of Superman, I was eager to get it and figured it would be that TV version.  Alas, it was not.  Sure, you got some new scenes, most famous of which is probably the sequence involving Superman working his way into Lex Luthor’s lair for the first time and being attacked by Luthor’s many security features, including a machine gun and heat…

In the theatrical cut, they got rid of the security features and just went ahead and showed Superman arrive in the underground, then cut to him ripping the metal door to get into the lair.

There was also Luthor’s “Babies”, some kind of wild and deadly animal that he torments Otis into feeding and which plays a role toward the end of the movie…

However, there were also scenes that were put back in that, frankly, had me scratching my head.  It seemed like the whole thing was fairly haphazard in terms of what they decided to add back into the film and what they left out.

There was one tiny only a few seconds long sequence that I really liked in the 3 hour version that, for whatever reason, they didn’t bother putting back into the SE:

Immediately after the Clark/Lois-mugging-scene, our leads emerge from the alley and take a cab and, with them inside it, drive off.  The camera (if memory serves) then pans away (without cutting) to across the street and there we see, for the first time, Otis (Ned Beatty), Lex Luthor’s henchman.  As we shift from Clark and Lois and to Otis, the music shifts as well and we transition to Otis’ theme.

I always liked the way that little scene worked.  It made the massive city of New York suddenly seem smaller, more interconnected, and provided a much more comfortable transition from our leads and to the introduction of our movie’s villain.  (In the theatrical version, it always felt rather abrupt the way we go from the mugging scene to suddenly seeing Otis walking the streets)

As I already stated, this sequence couldn’t have been more than a few seconds long yet I always liked it and was scratching my head when the SE didn’t bother including it.

I wish I could give more examples but, alas, I haven’t seen the extended version in quite some time.  I got rid of my VHS player a very long time ago though I still have those VHS tapes of the extended movie.  A while back I considered taking them to get converted to a DVD format.

Now, with the formal release of that 3 hour TV version of Superman, I won’t have to.

I can’t wait to get my hands on this copy of the movie!

These two pieces were being worked on and off the past few days.  Last night I decided to finish ’em off.

First up is my take on a publicity still from the classic 1946 Alfred Hitchcock film Notorious.  The movie stars Cary Grant and Ingrid Bergman and many consider it one of Mr. Hitchcock’s all time greatest works. 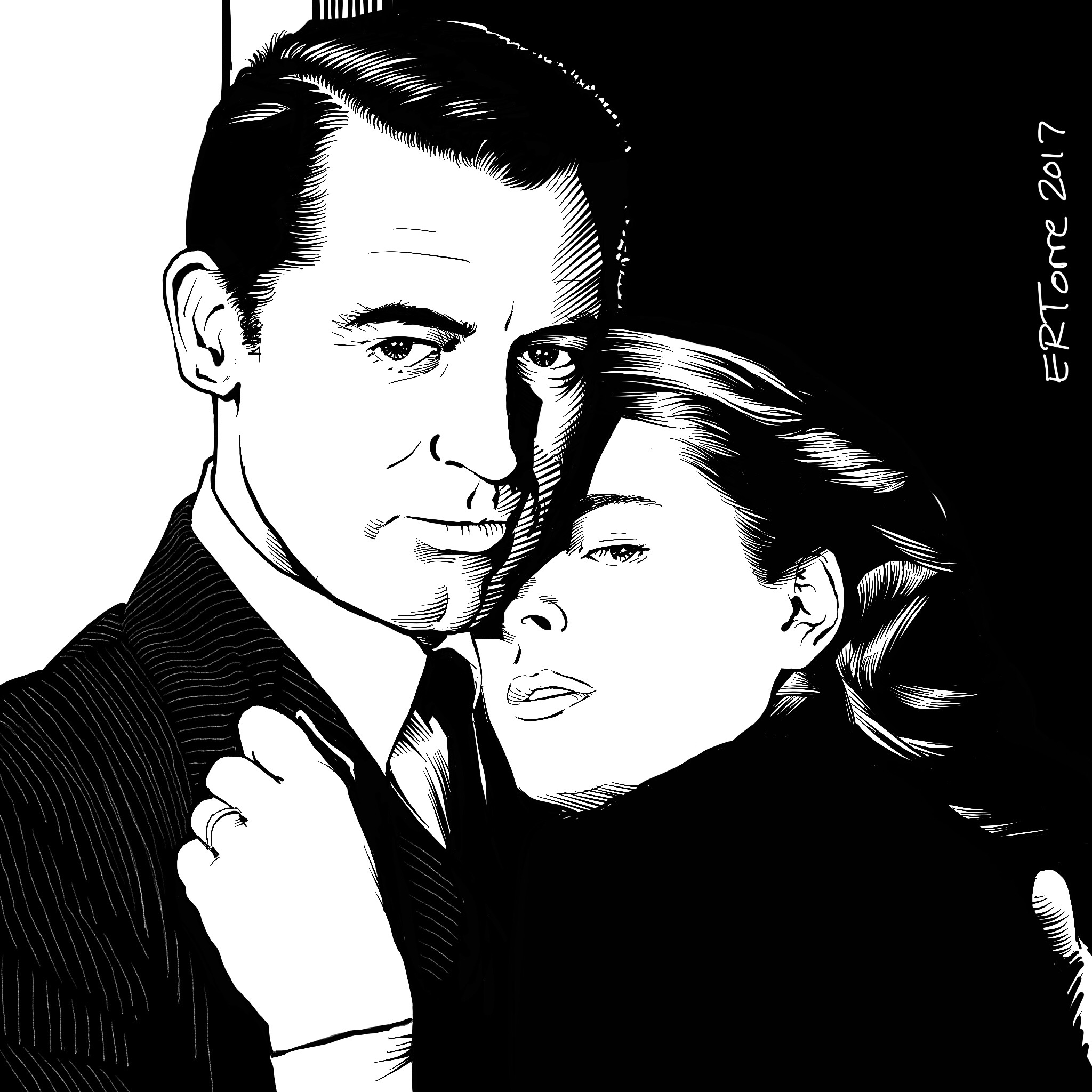 I’m not entirely satisfied with the piece, largely because I feel I didn’t get Mr. Grant’s eyes as well as I wanted to.  I’m happy about the rest of the piece and I could one day return to this and take on those eyes once again.  In the meantime, love the while pattern lines on his suit.  That part really came out wonderfully, IMHO!

Next up is the actress Sarah Douglas in one of her most memorable roles, that of the villain Ursa from Superman and Superman II… 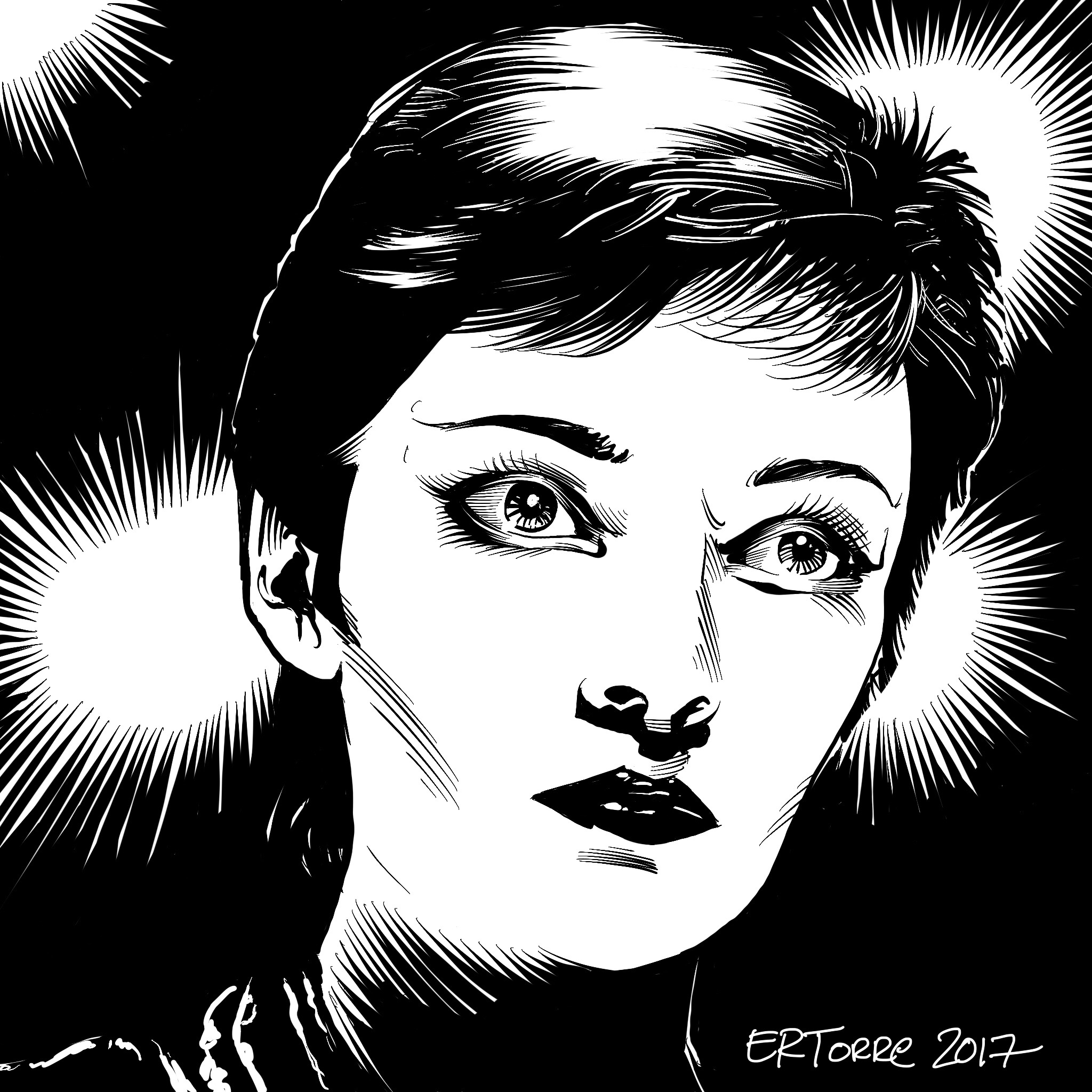 As I mentioned before, one of the things I most like about using the iPad and Apple Pencil (no, I’m not getting any money for mentioning my tools) is that it allows me to experiment.

In the case of the Ursa picture, I quite literally did a 5 minute piece, hardly bothering with getting everything “right”, then came back to it yesterday.  Once again, I realized I needed to work on the eyes.  Eyes are usually THE thing that either makes or breaks your piece and in their original form as drawn they looked too sloppy.

So last night I erased the eyes I had and redrew them and, suddenly, the picture was something like a thousand times better.  I cleaned up a little stuff here and there and added that weird lit up/dark background and, voila, another piece.

I’m quite happy with it!